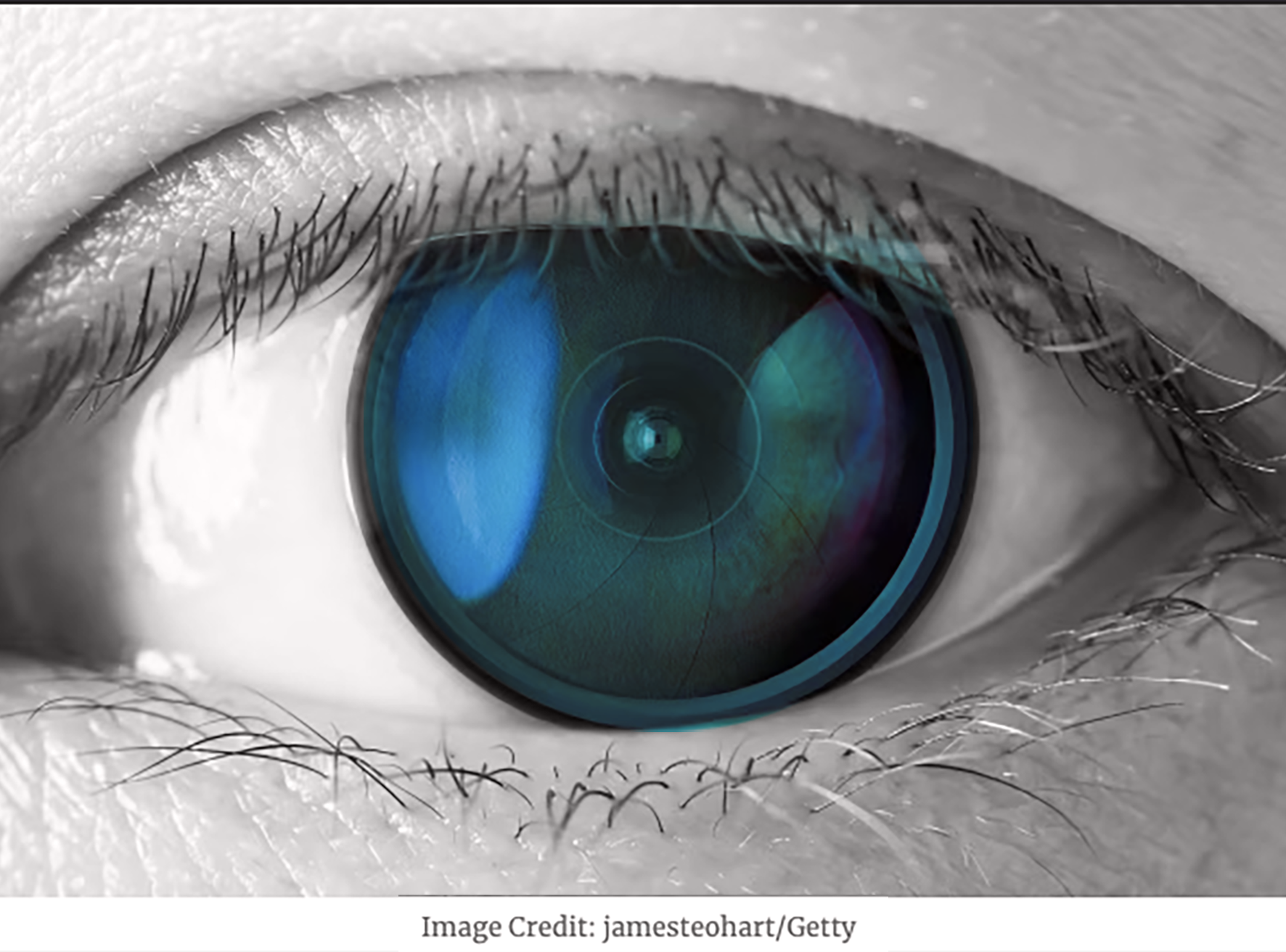 Thirty years ago, a group of human test subjects volunteered to try something for the first time – they climbed into an exoskeleton, pressed their face to a vision system, and manually interacted with a mixed reality of real and virtual objects. They were testing a prototype augmented reality system at Air Force Research Laboratory (AFRL) that enabled users to engage with virtual objects merged with the real world.

The system filled half a room and cost nearly $1 million to build, but it worked – demonstrating for the first time that AR technology can enhance human performance in real-world tasks.

Last week, a new milestone in AR technology was achieved and it highlights how far the field has come over the last few decades. I’m talking about the first authentic test of an augmented reality contact lens. It happened in a research lab at Mojo Vision in Saratoga, California, and it wasn’t a crude bench test of oversized hardware with wires dangling. No, this was an authentic test of an AR contact lens worn directly on the eye of a real person for the very first time.

As someone who has been involved in AR technology from the beginning, I need to highlight this milestone. Creating an AR contact lens is very difficult.

When I tell that to people, they usually focus on the display technology. The ability to put a high-resolution display on a tiny transparent lens is a daunting prospect, but it’s still the least difficult piece of the puzzle. The harder part is that the tiny lens, which needs to sit comfortably on the human eye, has to communicate wirelessly with external devices and be fully powered without a physical tether of any kind. This is very challenging, and yet it’s what Mojo Vision achieved in their latest demonstration.

Of course, the display technology is impressive too.  According to the company, the Mojo Lens has a 14,000 pixel-per-inch microLED display with a pixel pitch of 1.8 microns.  To put this in context, an iPhone 13 with a Super Retina XDR Display has 460 pixels per inch. In other words, the Mojo Lens display hardware has about 30 times the pixel density of a new iPhone.

In addition, these lenses include an ARM processor with a 5GHz radio transmitter, along with an accelerometer, gyroscope and magnetometer to track eye movements.

And all of this sits directly on your eye.

And that’s still not the hardest part. In my mind, the most challenging hurdle in achieving AR contact lenses is power. According to the company, the Mojo Lens includes medical-grade microbatteries. It’s not clear what the current battery life is for today’s prototype, but according to Mojo, their product objective is power management that enables all-day wear.

The future is AR

I’m sure there’s a long road ahead to get from today’s prototypes to widespread deployment of low-cost contacts that bring immersive AR capabilities to people around the world, but I firmly believe this is where the industry is headed. In fact, I predict that AR eyewear – first as glasses and then as contacts – will replace the mobile phone as our primary interface to digital content within 10 years.

Furthermore, I believe augmented reality will change society significantly, as it will transform digital assets from artifacts we selectively access into seamless features of our physical surroundings.

A few years ago I wrote a futurist narrative entitled “Metaverse 2030” that attempts to accurately portray what life will be like when AR contact lenses become commonplace. The piece suggests that in the next decade, mainstream consumers will get fitted for new contact lenses whenever they sign up for a mobile subscription. Will this really happen within the next 10 years? Only time will tell.

But one thing is certain today – over the last 30 years, the technologies to enable immersive AR have been invented at an impressive pace, taking the field from a room full of expensive Air Force hardware in 1992, to tiny transparent lenses that fit on the surface of your eyes in 2022. And along the way, there have been many significant innovations, from the Microsoft HoloLens and Magic Leap headset to Pokémon Go and Snap AR.

With so much impressive engineering happening in labs all around the world, I remain confident that AR will replace the mobile phone as the platform of our lives within the next 10 years.

Louis Rosenberg, Ph.D.is a longtime researcher and entrepreneur in fields of augmented reality, virtual reality and artificial intelligence, and has been awarded over 300 patents for his work in those fields. He is currently CEO and chief scientist of Unanimous AI. He began his career developing early AR technologies at NASA and Air Force Research Laboratory (the Virtual Fixtures project). Rosenberg earned his Ph.D. from Stanford University and was a professor at California State University.

Welcome to the VentureBeat community!

DataDecisionMakers is where experts, including the technical people doing data work, can share data-related insights and innovation.

If you want to read about cutting-edge ideas and up-to-date information, best practices, and the future of data and data tech, join us at DataDecisionMakers.